On April 26, Sony, the company responsible for the marvels of entertainment technology such as the Walkman and PlayStation, registered its first patent related to blockchain technology. Published by the US Patent & Trademark Office, it is titled as Blockchain-Based Digital Rights Management or DRM. It was registered both by Tokyo-based Sony Corp and Culver City, Calif-based Sony Pictures Entertainment.

Based on distributed ledger technology, this system is capable of managing and storing users’ digital entitlement data on the blockchain. According to the patent application, the new DRM has several possible applications. It can receive public-key fueled enrollment requests and make sure the user has the private key to match the public key, inclusively DRM can generate a unique user ID, generated via public key. It is also capable of “generating and delivering the rights blockchain having a genesis block including the user identifier to the use”

In the image bellow is the explanation of the blockchain based DRM: 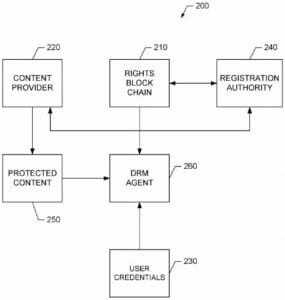 In the patent application, Sony warns

“However, these conventional solutions may not be very reliable and rely on one unique point of failure. If the rights locker provider or system goes out of business or otherwise fails, the user loses all the acquired content.”

Blockchain-fueled DRM would remove the need for a third-party service provider and create a host of possibilities, erasing the friction in the process and giving Sony and its customers more control of data. Sony describes in one scenario how “content data can be for various types of content or other data, such as movies, television, video, music, audio, games, scientific data, medical data, etc.” The other application proposed by Sony is that the user ID would then determine the rights of the customer, “such as one user having the same or different rights on different devices, users sharing rights (e.g., family accounts or primary/subordinate accounts), temporary sharing of rights (e.g., lending, demo models),”